“Consequently d / a allows us to verify that the gradient is correct.”
I didn’t understand the meaning of d / a.
So I code as follow. But now, I’m more confused.

The MXnet code of prediction mode haven’t mentioned.
I was wondering about the PyTorch’s code.

RuntimeError: Trying to backward through the graph a second time, but the buffers have already been freed. Specify retain_graph=True when calling backward the first time.

RuntimeError: grad can be implicitly created only for scalar outputs

But when I import it, it just happens as follow.
How to fix it?

Can you explain what exactly is the doubt here?
To import -> from d2l import torch as d2l you first need to install the d2l package in your environment.

After running pip install -U d2l -f https://d2l.ai/whl.html,
I can directly run from d2l import torch as d2l

But I’m confused about the bug when I directly run the imtorch.py(rename from d2l/torch.py）

Answer to first question.
tensor.detach() creates a tensor that shares the same storage with tensor that does not require grad.
But tensor.clone() will also give you original tensor’s requires_grad attributes. It is basically an exact copy including the computation graph.

The second answer about "the meaning of d / a " in 2.5.4.
“a.grad == (d / a)” is true because if you see how d is calculate using f(a). It is basically scaling a by some constant factor k. And if you were to do differentiate such a function say function d=k*a with respect to a then you would get that k. Hence these are true and obviously it won’t hold for b because d is a function of which scales a and not b.

Answer to third question.
As i suggested earlier and you probably did it, you can simply pip install d2l to import torch from d2l.
If you want to import the specific rename imtorch.py just add this to the start of your code before making the import. ->

Let me know if these answers solve your issue.

Q1.
Does it mean that if I ‘clone’ a tensor or a Variable that has requires_grad attribute, then I don’t need to .requires_grad() for the new one?

Use detach() to remove a tensor? However, why can I still judge x.grad() == u.grad? “Remove” doesn’t mean that x will not exist? I think that x and u are just two different names for the same storage.

Q3.
Thanks. I will try it next time. I have did pip install d2l
The specified module could not be found
Did the problem happen because the module doesn’t exist in my sys.path?

Ans1.
Yes we don’t use Variable in PyTorch now. We can use Tensor to do everything a variable did earlier with the latest version.

Ans2.
Yes, f(b) will be 2*b and if you change it to the following you will get True.

Ans3. Just uninstall the pip version and run python setup.py develop in your root d2l-en directory for installing the library.

Ans3.
Just run this python setup.py develop in your repository.

Why does it make False?
I found that print(b.grad) is None?
Why did it happen?

my solution to question 5 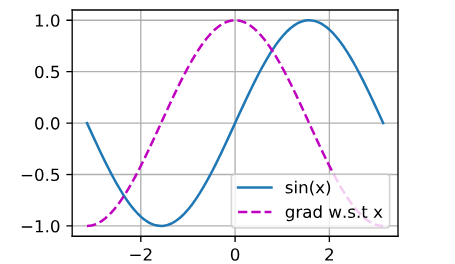 looks dummy since I compute the grad 100 times, is there any better way?

which specifies the gradient of the differentiated function w.r.t self.

What does it mean? Does “gradient of differentiated function” mean “second order gradient”?

My answers to the questions: please point out if I am misunderstood anything

Because instead of following the original computation graph, we need to construct a new one that corresponds to the calculation of first-order gradient?

RuntimeError: Trying to backward through the graph a second time, but the saved intermediate results have already been freed. Specify retain_graph=True when calling backward the first time.

Directly changing would give the “blah blah … only scalar output” which is what 2.5.2 is talking about. I changed the code to

and a.grad == d / a still gives true. This is because in the function, there is no cross-element operation. So each element of the vector is independent and doesn’t affect other element’s differentiation.

which specifies the gradient of the differentiated function w.r.t self .

What does it mean? Does “gradient of differentiated function” mean “second order gradient”?

Hi @SONG_PAN, this is a first order gradient. The gradient is only available after we differentiate the function.

This file has been truncated. show original

with the following sentence:
y.sum().backward(retain_graph = True)

Anyone know how the backpropagation of CNN and RNN works? Are there any step by step tutorials to show the derivation? Thanks!

“Searching” is the best way to solve common questions like this.
Do you really want to learn? Or you only want to ask to act like a learner.
CNN: TODO:for you
RNN: http://preview.d2l.ai/d2l-en/master/chapter_recurrent-neural-networks/bptt.html