I never understood why the original paper uses the following notation:

image753×132 7.86 KB
What exactly are the Q, K, V matrices? I have found in some articles “explaining” the paper that these three Q,K,V are actually the same input matrices. But then wouldn’t they just mention it as such in the original paper?
Sebastian_Ciobanu March 31, 2021, 12:03pm #3

Suppose that the input representation X \in \mathbb{R}^{n \times d} contains the d-dimensional embeddings for n tokens of a sequence.

The output of a self-attention layer is still a matrix X' \in \mathbb{R}^{n \times d'}. I see that the order is still maintained and is given by the row number in X and X'. Then why do we say that the word order is not preserved in self-attention?

I am surely missing something, so I need some help. Thanks!

Hey @sprajagopal, great question! First just for clarification, Q,K and V don’t need to be the same. They might be the same in some specific model or specific task, we most of the time, at least the Q (query) is different to K (key) and V (value). For example, in BERT, query represents the bidirectional context, while key/value is the token itself.

I understand it is confusing at first, but after reading more original paper such as BERT, GPT3, you will get a more universal view on transformer and attention applications! Good luck!

Hi @Sebastian_Ciobanu, I may not fully understand your question, could you point out the specific example/location at the book? (Just a side note, transpose_qkv in 10.5 may help!)

Thanks for your answer, @goldpiggy!

Unlike RNNs that recurrently process tokens of a sequence one by one, self-attention ditches sequential operations in favor of parallel computation. To use the sequence order information, we can inject absolute or relative positional information by adding positional encoding to the input representations. Positional encodings can be either learned or fixed. In the following, we describe a fixed positional encoding based on sine and cosine functions [Vaswani et al., 2017].

Suppose that the input representation X \in \mathbb{R}^{n \times d} contains the d-dimensional embeddings for n tokens of a sequence.

I think that the authors suggest that self-attention does not take into consideration word order in a sequence. I also found this idea expressed on the Web:
Transformer Architecture: The Positional Encoding

As each word in a sentence simultaneously flows through the Transformer’s encoder/decoder stack, The model itself doesn’t have any sense of position/order for each word. Consequently, there’s still the need for a way to incorporate the order of the words into our model.

The above reference you found are both trying to introduce “positional encoding”'s function, so don’t pay too much attention on them.

Yet another question raised concerning the position encoding when I print P: 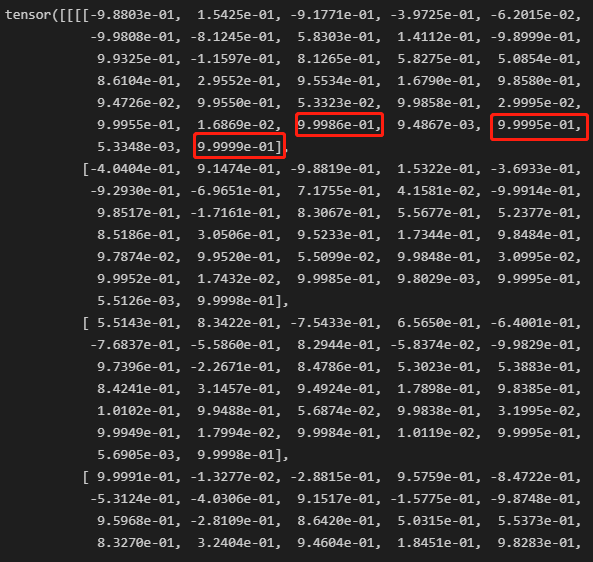 image593×562 17 KB
, as shown in the following:
For the 1st token, while each position has unique value, some are very close (red boxes) than others. So the euclidean distances among these 3 position are much smaller than among others.
I am wondering if it poses problems to what position encoding intents, and bias weights towards some specific position than others.
jimmyrigby94 November 12, 2021, 3:04am #10

It might be a difference in versioning, but the mxnet positional encoding function breaks when the the P tensor’s third axis dimension is odd. When P.shape[2] is odd, X and P will no longer align. You will need to implement some conditional indexing on X to get the tensor into the right shape.

Completely understand if you are going for minimal code for pedagogical reasons. I just wanted to flag a potential sticking point for more general applications.