Can someone please help me with this part. I am not able to interpret from the code examples what the statement is trying to say

This requires understanding the chain rule using the graph 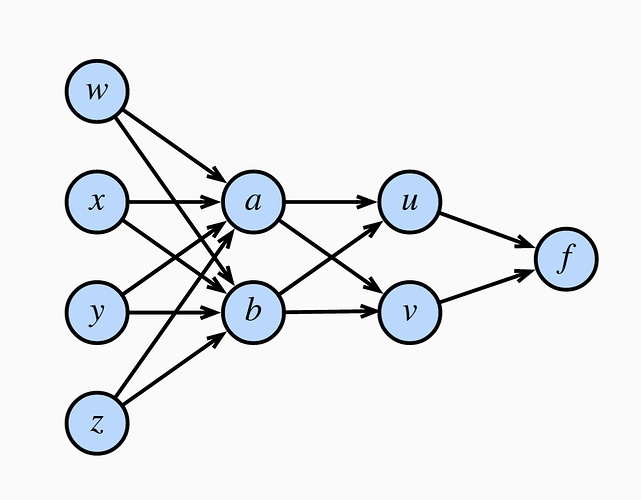 All these single step derivatives are computed first, let’s call this (as the book does) a “forward pass” or step 0, there is no getting around that.

If we want to compute df/dw, we need to consider paths w ->f, and the point is that if we already did df/dx the backwards way, we can reuse the calculations we did: we can break up w-a-u-f as w-a and a-u-f, and the a-u-f we have seen (and stored df/da) when breaking the path x-a-u-f the backwards way via x-a and a–u-f.
By contrast, if we break up paths the forward way in computing df/dx, e.g. x-a, x-a-u, x-a-u-f, these partial paths all start with x, and so are no use for calculations involving (forward) paths that start at w! It is still possible to compute df/dw via w-a, w-a-u, w-a-u-f, etc (not going to list all) but you don’t get a chance to reuse previous calculations.